It is a hot (geopolitical) summer. In Asia and in Eastern Europe. Away from the North Korean crisis or the Qatar parading blockade, EU-based delegations are increasingly visiting Minsk these months. In one way or another, the European Union and its member states are looking for a readjustment of their relation with the secluded republic on the Eastern flank. Roughly put, Belarus is tucked in a Russian corner that it can hardly escape even if it wished. And it doesn’t.

However, what Lukashenko truly seeks is to balance Russia’s unbearable influence in order to get more leverage in their bilateral relation. It needs more friends outside the ‘family’ in order to increase his influence within it. And state visits to Kazakhstan, Pakistan, Turkmenistan, Azerbaijan or Turkey are of no real help in this regard. The friends it really needs are stronger, richer and quite near. Right on his border.

Thus, despite a lack of shared ideological values, the European Union is the geopolitical partner he needs. As Lukashenko has anxiously observed in the Ukraine crisis, post-Soviet ‘family’ affairs can get particularly messy and – eventually – lead to amputation of key territories. And before such storms might rage, one must ensure – at least – a secure North-Western flank. And a decent economy.

Exports of Belarus [2015] [Source: The Observatory of Economic Complexity]

Moreover, Belarus faces a veritable dilemma regarding its mercantile situation. The national economy is overwhelmingly dependent on Russia. This might translate in cheaper oil and gas, in preferential access to the Eurasian markets, but it is – nonetheless – a situation of captivity. It is unbalanced, undiversified and lacks a high-tech industrial base.

And the situation did not get better over the years. On the contrary. It got worse. The latest EU reports show that Belarus’ total trade in goods with the Union rather decreased, while that with Russia increased even more. As it stood at the end of 2016, the great Eastern neighbor accounted for 51% of Belarus’ total trade in goods, followed by EU 28 with 21.9%, Ukraine and China (both under 10%). And this was not quite the path that Lukashenko had in mind for his economy. 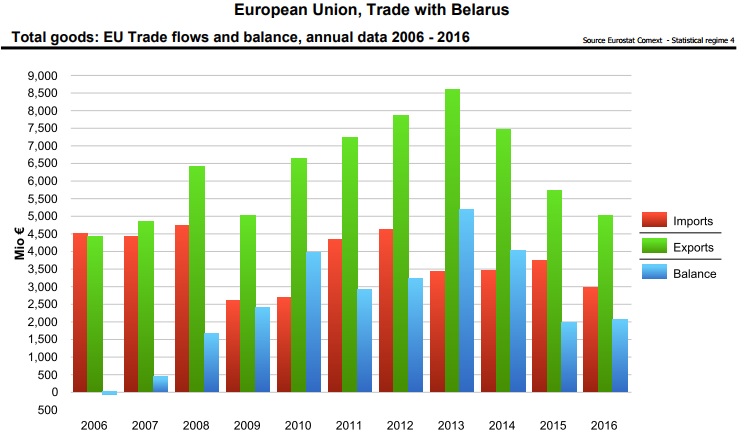 And it is a common knowledge point that the position of an authoritarian leader is imperiled even more when it faces dire economic prospects. For this reason, Lukashenko really needs to diversify his export destinations and have a viable standing alternative to the Russian markets. Not to fundamentally change the course, but rather to have more options on the table. Therefore, both politically and economically, the balancing act towards the EU makes good sense for Lukashenko.

But how do things look from the other side? What does the Union expect from Belarus?

First of all, the Union has a direct strategic interest in Belarus and not an economic one. This could translate into a mutually beneficial situation. Carrots work. And they (sometimes) prevent sticks from being shown around. With some increased market access and lowered level of public criticism (continuing to push – however – on the regular diplomatic channels for respecting human rights), Europe could also ease up the challenges of its Baltic and Polish flank.

Of course it would not block – in any way – Russia’s all-weather alliance with Belarus, but it would make it harder for Kremlin to extensively use the Bielorussian territory for hybrid attacks against its members. In addition, a country that would get wound-up in the prosperous EU market would be less inclined to accept taking vehement public positions along Russian lines. It would thus embolden Belarus to maintain a relative neutrality among its traditional allies and rather be a moderate vector within CSTO and the Eurasian Economic Union.

It cannot afford the same undecided love-and-hate relationship that confused Azerbaijan for more than a decade. The EU must take a pragmatic approach, based on strategic interest and tone down its support for the opposition. (EU-style) democracy in Belarus is out of the question anyway. At least for the moment. An obsessive reminder of this fact can only embitter bilateral relations, working in no one’s favor. It would only push Lukashenko deeper in Kremlin’s grasp while having no – veritable – effect in upholding human rights or building democracy.

The Latvian foreign minister, Edgars Rinkēvičs, observed exactly this when arguing that “like in cookery, in diplomacy it is important to use salt sparingly”. Thus, the European Union must leave its mark in a discrete manner. It can make use of its economic (soft) power and its diplomatic smoke-and-mirror play between the EU External Action Service and traditional member state interaction. Good cop and (not excessively) bad cop can come together in offering Belarus a deviant path within the ‘Russkiy Mir‘.