A quarter of century after the transformation processes began in Central and Eastern Europe (CEE) and over ten years after the largest enlargement of the EU, the division between core and peripheries has deepened. Compared to the 1990 period and to parallel developments in Western Europe show that while development in the East did happen, the gap between the ‘rich’ West and the ‘poor’ East and South remained.

We have divided the analyzed region of Europe into four groups, that largely reflect the stage of advancement of integration within the EU project. These are: (a) the Group I – the “older” 15 states that belong to the EU. Next, (b) Group II represents the “new” 10 states that joined the EU in 2004. After that, (c) there is a small Group III of three states (Romania, Bulgaria, Croatia), that due to their relatively low level of advancement in transformation and other issues, joined the EU later and in relatively less favorable conditions.  Finally, (d) Group IV is the batch of states that have been integrated with the EU economically, but have not gained the status of member states. For this latter group (IV), the EU remains an important point of political and ideological reference, but – at the same time – its members remain outside of the actual EU and, in this sense, they are recipients of EU policies but with no political influence or power.

In order to better understand the level of development of the four different groups of states and their economies, we need to look at the same factor from another perspective. A first step would be to compare the dynamic of the GDP (valued in international current USD), as reflected in the World Bank data. 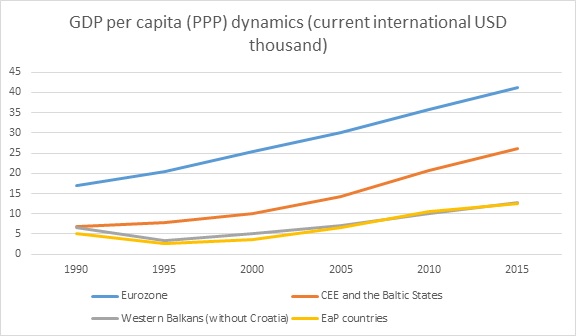 In the diagram above, the CEE and the Baltic States group comprises the Czech Republic, Slovenia, Slovakia, Hungary, Romania, Bulgaria, Croatia, Lithuania, Latvia, Estonia, but excludes Cyprus and Malta). This diagram clearly shows that although the GDP of all the groups increased, the difference between them increased as well. In fact, the CEE and Baltic states quickly emerged as middle ground players. At the same time, groups III and IV improved only insignificantly. All the latter three groups went through a very tough socio-economic and political transformation period at the turn of the 1980s and 1990s. In this sense, especially the peripheries in Eastern and Southeastern Europe faced some serious challenges that involved armed conflict and long-lasting economic crises.

In fact, the increase of GDP in group IV can be noted due to the relative success of the three authoritarian regimes in Azerbaijan, Belarus and Turkey. And this cannot be correlated with EU-sponsored reforms of free market, political pluralism and rule of law.

On the other hand, the GDP of group II took off along the process of EU integration. It has not, however, come any closer to the one of the Western ‘core’. In 1990, the difference was of about 10 thousand USD per capita. In 2015, this difference was of 15 thousand. In relative terms, group II created about 40 per cent of the GDP per capita of that produced in the West. In 2015, this number was increased to approximately 63 per cent.

The tables below show in more detail the GDP per capita indexes.

The data presented above show that – in 2016 – the existing division into more and less developed countries has been preserved regardless of the European integration of some of them. The three “best” states of the group IV still belong to relatively authoritarian states. The most pro-European states (Ukraine, Moldova, Kosovo, Bosnia and Herzegovina and Albania) enjoy only about one quarter of the average GDP per capita created in the EU 15.

These trends can be confirmed by the Human Development Index, as shown in the tables below.

The Eurostat has used the Actual Individual Consumption (AIC), another indicator of population wealth.

Taking the above into consideration, we can clearly distinguish a line between developed and less developed states. Moreover, the level of integration is correlated with the stage of integration within the EU.

The exceptions here would be countries like Greece and Portugal which have undergone a very deep economic and financial crisis, along with Malta, Cyprus and Czech Republic which – due to various factors – enjoy the highest level of development within the EU 10 group.

Therefore, if we consider the European integration based on the data provided above, we could definitely claim that it enables development and some limited upgrade of position, but it – nevertheless – preserves already existing inequalities between its members.

The author wishes to express his gratitude to Ms. Beyzanur Köken for her support in the preparation of this report.