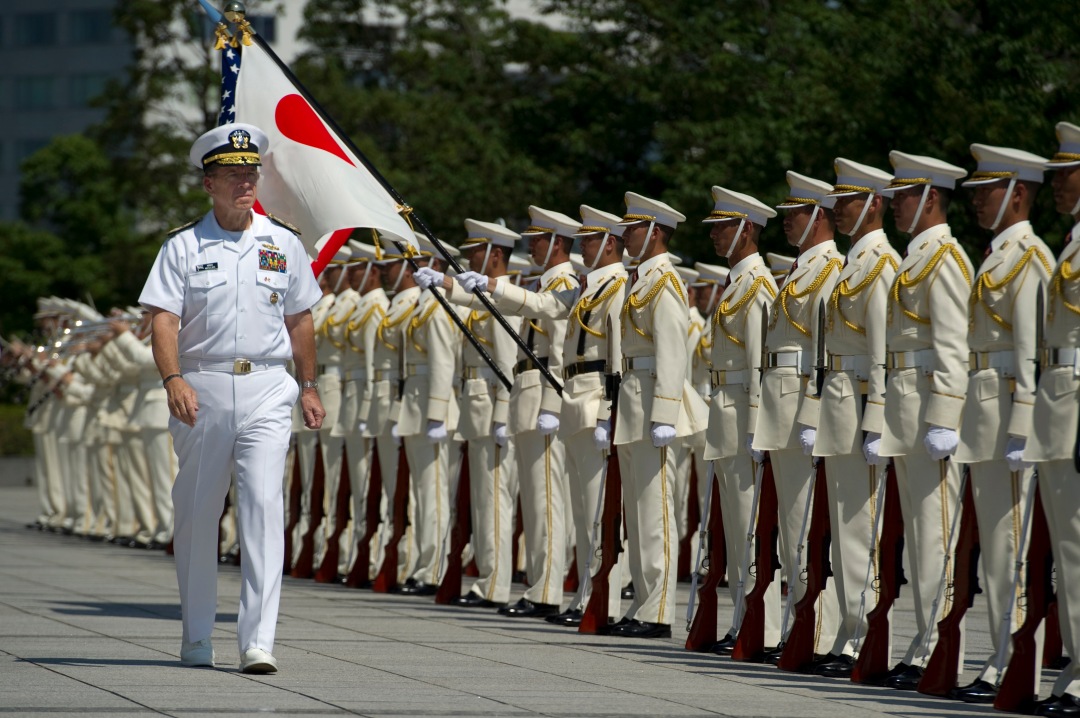 This Analytic Brief is the third in our series regarding Strategic Doctrines in the Asia-Pacific. For previous documents see the dedicated section.

But tell me, Taro, don’t you worry at times we might be a little too hasty in following the Americans? I would be the first to agree many of the old ways must now be erased for ever, but don’t you think sometimes some good things are being thrown out with the bad? Indeed, sometimes Japan has come to look like a small child learning from a strange adult. (Kazuo Ishiguro, An Artist of the Floating World)

Is remilitarisation a bad thing? It may be in an ideal world where power politics do not exist and geopolitical constraints do not shape state behaviour. However, in a world dominated by realist considerations, the argument can go both ways. Essentially, whether militarisation is considered a bad or a good thing depends on the vantage point of the one who asks the question. If Japan were to rearm itself, however, it may be argued from the same vantage point that this would be a good and a bad thing at the same time. The U.S., for example, may claim that Japan’s remilitarisation might support the East Asian balance of power. But, then again, Washington would look at Japan’s imperialist history during the interwar period and the Second World War (Henry Kissinger, World Order. Reflections on the Character of Nations and the Course of History, Allen Lane, the Penguin Group, London, 2014, p. 188, hereinafter referred to as Kissinger, World Order) and would think twice about the desirability of such an outcome.

Thus, there already is a dilemma, as there was a reason the U.S. desired Japan to limit its military capabilities through its Constitution (Kissinger, World Order, p. 189). It should be mentioned at this point that, although the Japanese Constitution limits Japan’s military capabilities, this limitation effectively does not apply to Self Defence Forces. I will not get into a detailed analysis of the legal aspects of Article 9 of the Japanese Constitution – the prohibition on war potential forces (the linked article above contains details on this issue) – and how was Article 9 interpreted throughout the second part of the 20th century to accommodate a limited military capability.

I will only mention that what is understood by remilitarisation within the present context is not a transition from lack of any forces to the existence of military forces. For present purposes, remilitarisation has to be understood as a deviation from the spirit of Article 9 of the Japanese Constitution – which was interpreted so as to permit the existence of defensive military forces – to the extent that such an outcome can occur without entailing a violation of the Constitution only if the Constitution were to be amended.

And, of course, one could ask himself: is deterrence even possible through remilitarisation when the most immediate security concerns are caused by two nuclear powers – China and North Korea? Would anything other than the development of nuclear weapons guarantee deterrence? But since the world is multipolar from the point of view of nuclear capabilities, one can argue that deterrence already exists by the fact that there exist such nuclear powers. Thus, using nuclear warheads would constitute an ultima ratio decision. Because of this, conventional military forces are still important and, as such, increasing such military capabilities could actually determine deterrence.

What Can Actually Determine Japan’s Remilitarisation?

The reference in the introductory part to how the U.S. would perceive a potential Japanese remilitarisation is not coincidental. This is the point of departure for any analysis. In fact, the U.S. can be considered the catalyst to any evolution regarding Japan’s remilitarisation. And this is because Japan is relying on the U.S. for its security concerns (Kissinger, World Order, pp. 189-190). After Japan’s undertaking to limit its military capabilities following the events of the Second World War, the U.S. undertook a defence commitment which could deter security threats to Japan – especially in the case of China and North Korea (Kissinger, World Order, pp. 189-191).

But, besides the defence commitments to Japan, the U.S. strategy in East Asia is that of maintaining a balance of power. Withdrawing from Japan would actually cause a disequilibrium in the balance of power. And the U.S. would be extremely cautious with such an outcome given China’s increasing assertiveness in the South China Sea. However, since China’s maritime power is considerably inferior to that of the U.S., the U.S. could afford a trade-off consisting of it leaving Japan with the latter improving its military capabilities. Disengaging from Japan could be considered to be in the U.S.’s interests provided it could maintain its relations with Japan at least at present levels.

Nonetheless, there is an additional issue which would have to be considered by the U.S. in order to leave Japan: the North Korean issue. A possible reunification between the North and the South would, at the moment, be a factual basis for the U.S. to disengage from Japan (Robert Kaplan, Geography’s Revenge – consulted in Romanian, the translation being Răzbunarea geografiei, Litera, Bucureşti, 2015 –, pp. 286-287; hereinafter referred to as Kaplan). A unified Korea would actually further determine a balance of power and, as such, it would be harder for any hegemonic power to appear in East Asia. This would include even China being limited in the scope of its assertiveness.

And if such an outcome were to occur, Japan would be even more incentivised to actually pursue remilitarisation: history shows that Japan has sought to control Korea and, given the fact that Japan actually controlled Korea between 1910 and 1945 (Kaplan, p. 286), one can see that Japan’s geostrategic concerns are strongly linked to the evolutions on the Korean peninsula. Moreover, Japan has always considered Korea as being the key strategic point in North-East Asia (Henry Kissinger, Diplomacy – consulted in Romanian, the translation being Diplomaţia, All, Bucureşti, 2013, p. 417). Of course, one has to ask himself how likely is a Korean reunification to occur.

Another aspect of importance which could determine Japan to increase its military capacities is that Japanese and U.S. interests are, at times divergent. For example, as regards Iran, Japan considers that maintaining cooperative ties with all oil-exporting countries in the Middle East is an essential foreign policy goal. Another example is Japan’s relation with Russia. In this case the former has even been put in an uncomfortable position after the Skripal issue. Japan was actually pressured to accept a joint statement on the Skripal case that fully endorsed the United Kingdom’s claim that “it is highly likely that the Russian Federation was responsible for the attack and that there is no plausible alternative explanation.”

While Japan’s reliance on the U.S. to guarantee the former’s fundamental security interests cannot be considered to be of smaller importance than the relations with Iran and Russia (the U.S. – Japan security relations could even be considered the most important element in Japan’s foreign policy), one cannot ignore the fact that such divergences can generate, from a strategic point of view, the need to seek other ways to address fundamental security needs. Nonetheless, this does not mean that such a switch, if it were to happen, would happen in the immediate future. But security strategies are built over decades, not only in relation to immediate political events.

Finally, what must be considered, as well, is Japan’s reliance on natural resources coupled with the existing tensions in its maritime vicinity. Those issues are able to determine Japan to look to guarantee its security by rearming itself. In this way, it can make sure that it is able to guarantee deterrence and, at the same time, secure the sea lanes for its access to natural resources.

The Present Situation. How Likely is it that Japan would Actually Pursue a Military force at Present Prohibited by Article 9 of the Constitution?

Currently, Article 9 of the Constitution is still effective and binding: Japan can only rely on defensive military forces. Latest developments show that Japan has undertaken an important change in the military structure of its Ground Self-Defence Forces (JGSDF), the largest change since the JGSDF were formed in 1954. This may be of importance, but it can be argued that such a development is still covered by Article 9 of the Constitution. Moreover, internal politics are characterised by a division between decision makers and even within public perception as regards amendment of the Constitution.

Thus, is Japan likely to pursue an increase in its military forces? Very likely, especially if it is done for defensive purposes – or at least presented under such rhetoric. Is Japan likely to pursue a considerable increase in its military capabilities so that it can have a military force beyond that which is needed for immediate defence concerns? Less likely and contiguous upon evolutions such as the U.S. presence on Japanese territory and developments concerning China and North Korea. However, in the end, when one is faced with an ever-assertive China and an unpredictable North Korea, is there such a thing as too much deterrence?

Alexandros Bakos is currently pursuing an LL.M. in International and Comparative Business Law at Babeş-Bolyai University. During his studies, he developed an interest for Public International Law, Energy Law, International Economic Law – especially Investment and Competition Law – and Human Rights Law. He combines his legal knowledge with a knowledge of geopolitics and strategic studies based on a realist approach and, at the same time, focusing especially on the economic relations of major states.